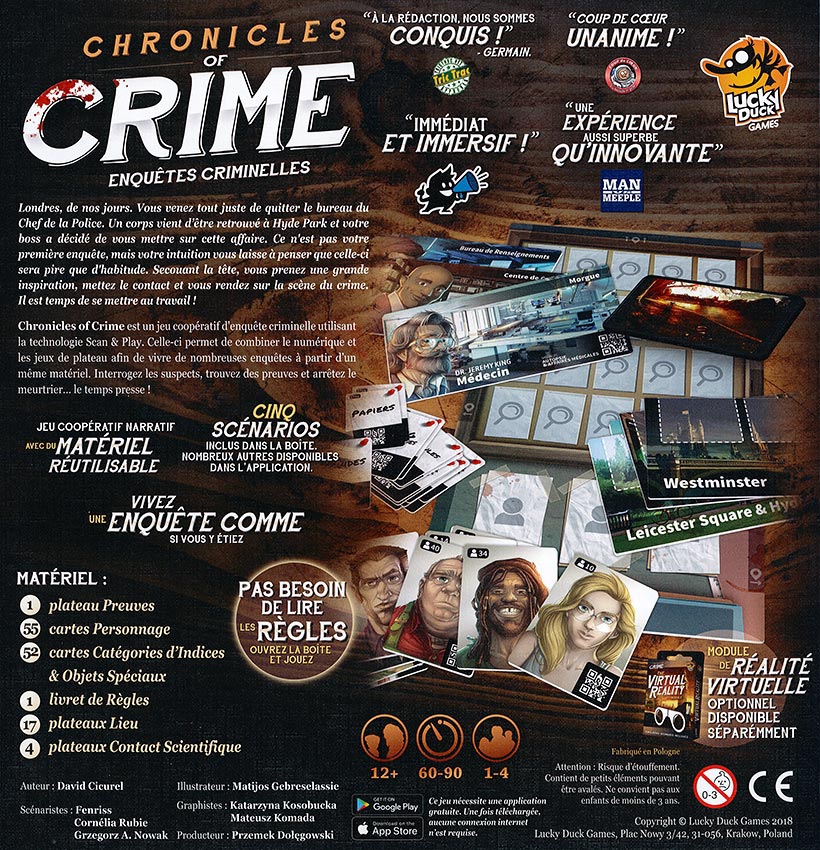 fan-made free boardgames community cooperative
This page refers to additional scenarios for the game Chronicles of crime
These scenarios are free of charge and some of them were created by Franck D, the creator of activitypedia.
This article is also available in French : Scenarios supplémentaires pour Chronicles of Crime

This fan-made scenario is not really an investigation, much more a kind of escape game adventure.
You can download it from : Z stand for 0.97 - Chronicles of crimes fan made scenario
difficulty : hard
not suitable for children
it contains multiple virtual scenes to seach for.
English version has been released on 10th october 2020. It’s a 1st draft which probably needs some more work.

The treasure from the secret hut was stolen. Find out what was in the treasure and help Capucine find the culprit.

This scenario was designed for children from 7 years old, without violence, to play with their families. Don’t get me wrong, it’s not that easy.
It is available in several languages and has already been downloaded more than a thousand times.
You can find it here: The secret Hut v1.6 - released 24th feb 2020

Scotland Yard. Friday night, 9:00 p. m. Sir Witson, a school principal, arrives at Scotland Yard.
He is worried about one of his students. Henri-Xavier from Dunsmouth is not at home. We have to find him.

The 1st community scenario, created by Cyol. without violence, compatible for all ages.
you can find it hereThe Dunsmouth Curse

The Centre’s bank was robbed, 5 suspects were arrested nearby. It’s up to you to question them and find out who robbed the bank.
This scenario, reserved for the oldest (14+), is available here: The robbery v1.94 - 29th dec 2019

A diver has been found dead in the hills, far from any waterside. What is he doing here ? Who killed him ?